Heeding the call of solitude – a call that attracted him throughout his priestly life – Father Moreau first went on retreat here in 1824, at which time he enrolled in a “union of prayers” with the abbey. (Catta I, 335). His more consequential visit to this abbey occurred in the summer of 1835 when, after the bishop of Le Mans had authorized him to form a society of diocesan missionaries, he went here to “lay the foundations of his new society” (Catta I, 335). 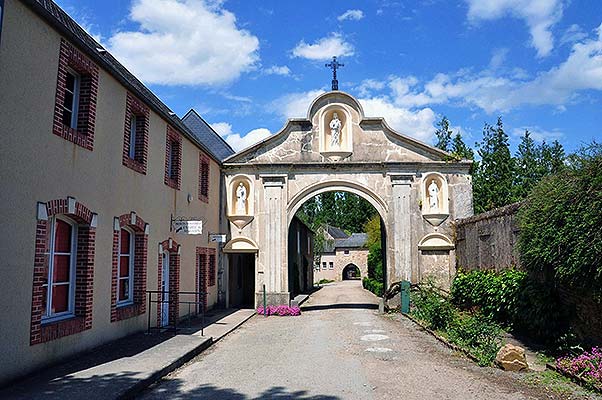 “They were four, besides M. Moreau: two priests, Abbés Cottereau and Nourry; and two seminarians, Abbés Veron and Moriceau […] The Abbey of Port-du-Salut was chosen, not merely because it was nearby nor because of the somewhat wild solitude it afforded on the banks of the Mayenne [river]. The place itself and its monastic atmosphere could not but have been dear to M. Moreau, and he had already spent some time there on several occasions; as early as the summer vacation of 1824 he was enrolled ‘in a union of prayers’ with La Trappe. In the meantime a new element had brought him ever closer to the monastery, since its new abbot, Dom François d’Assise Couturier, was also a former student at the Solitude, and at the same time as himself. […] Hence, it was a friend who listened to the first proposals of M. Moreau and his priests. […] From his cell in the infirmary where he was confined by ill-health, Dom Bernard was also able to offer his own kindly advice. During this retreat at the Trappists the group adopted the name of “Auxiliary Priests”. They thus announced that the preaching of retreats and missions would not be their sole occupation, but that they would also engage in the parochial ministry, substituting for pastors or assistants who might be ill, and providing help for understaffed parishes, especially at
Easter time and on the occasion of other major feasts. As they had no quarters available, it was agreed that they would remain temporarily at St. Vincent’s Seminary and that there, under the direction of M. Moreau, they would prepare themselves by study, prayer, and all the exercises of a holy life, for the heavy responsibilities entailed by the task they had taken upon themselves” (Catta I, 335-
336).

The abbey is located near the confluence of the Mayenne and Jouanne rivers. The nearby presence of Neolithic stone formations testify to the sacredness of the site dating back to the pre-Christian era. In the time of the Gauls, the region represented an important junction of routes. Gallo-Roman and Merovingian ruins are also present: ramparts and Roman baths, indicating that the location served as an important boundary between Brittany and the domain of the Franks.

The monastic life has been present here since the 9th century. The abbey church, dedicated to the Virgin Mary and to Saint Nicholas, was built in the 13th century by the lord of the territory: Thibault de Mathefelon. In the year 1233, the church was entrusted to the Canons Regular and a priory was constructed. The priory exists to this day and is encircled by the more recently constructed monastery buildings.

In 1707, the priory was incorporated into the reformed order of Canons Regular of Saint Genevieve. At the time of the French Revolution, the monks were expelled. The monastery land was sold and the buildings abandoned, until they were inhabited once again, this time by Cistercians (Trappists). Re-founded in 1815 by Dom Bernard de Girmont, Notre-Dame du Port-du- Salut was the first monastery in France to experience rebirth after the Revolution.

As an aside, the abbey is the site of the origins of the famous French cheese: “Port-du-Salut”, more commonly known by the name “Port-Salut”.