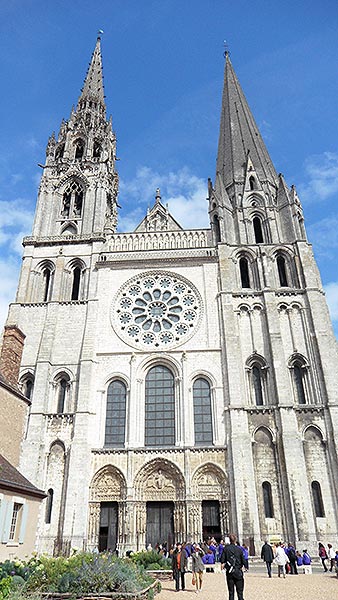 Early in 1822, not long after his ordination to the priesthood, Father Moreau wrote: “…I intend to make a pilgrimage on foot to Chartres in order to place my priestly ministry under the protection of the Blessed Virgin… If I am alone in my ministry I shall make a fiasco of whatever task is entrusted to me, but if the Blessed Virgin has a hand in it, I can hope for everything.”

In the summer of 1831, while traveling by stage-coach to the Solitude of Issy to make a retreat in the company of M. Mollevaut, Father Moreau made a stop at Chartres and celebrated Mass at the cathedral of Chartres, “while recalling the memory of M. Olier” (founder of the Society of Saint Sulpice).

On another occasion at Chartres, this time in January of 1842, Father Moreau consecrated his communities of brothers, priests, and sisters to Our Lady. In March of that same year, he received in Le Mans a letter from the bishop of Chartres, which encouraged him greatly: “These rules and constitutions [of the Association of Holy Cross] seem to me to breathe the spirit of God. They cannot fail to lead anyone who observes them to the perfection of the religious life, for they will afford them the means to sanctify the faithful by prayer, instruction, and example.”

Finally, Mother Mary of the Seven Dolors – Father Moreau’s close collaborator in the foundation of the Marianites of Holy Cross and the first Superior General of the Marianites – herself traveled to Chartres in February of 1867 (with her assistant, Sister Mary of St. Liguori, and with Father Charles Moreau, nephew of Father Basil Moreau) to invoke the intercession of Our Lady for the approval of the Constitutions of the Marianites of Holy Cross. She would learn later that the constitutions were indeed approved by Rome, with the decree of approval dated the very day she and her companions prayed for the intercession of Our Lady. Mother
Mary returned to Chartres some time later to offer prayers of thanksgiving.

The origins of Our Lady of Chartres date to a legend that ancient Celtic-Gaul druids worshiped a mother God in the place that is now the crypt of the cathedral. There they had a statue of a “Virgin, before giving birth.” Early Christians replaced the worship of this pagan mother-God with veneration of the Blessed Virgin Mary. This crypt is called “Our Lady under ground.” The first cathedral was built above it around the year 350, but was destroyed by Visigoths in the sacking of the town inthe 8th century. A new cathedral was built, which was destroyed in the year 858 by Danish Viking pirates. This led to the construction of a Romanesque cathedral, which was destroyed by fire in 1194. The current cathedral was built mostly in the first half of the 13th century.

The Gothic cathedral that stands today is one of the greatest marvels in the world. It is a landmark in architectural innovation, relying on columns, pointed arches, and flying buttresses to carry the weight of the building. This allowed the architects to expand the building upward to more than twice the height of earlier cathedrals and freed the walls to be filled with the now-famous stained glass windows. In the windows, which are regarded as the finest examples of stained glassmaking in history, parables and figures of the Bible come to life with color and light. Created in an age when most parishioners were illiterate, the glass images were a vital tool for instruction in the Christian faith. 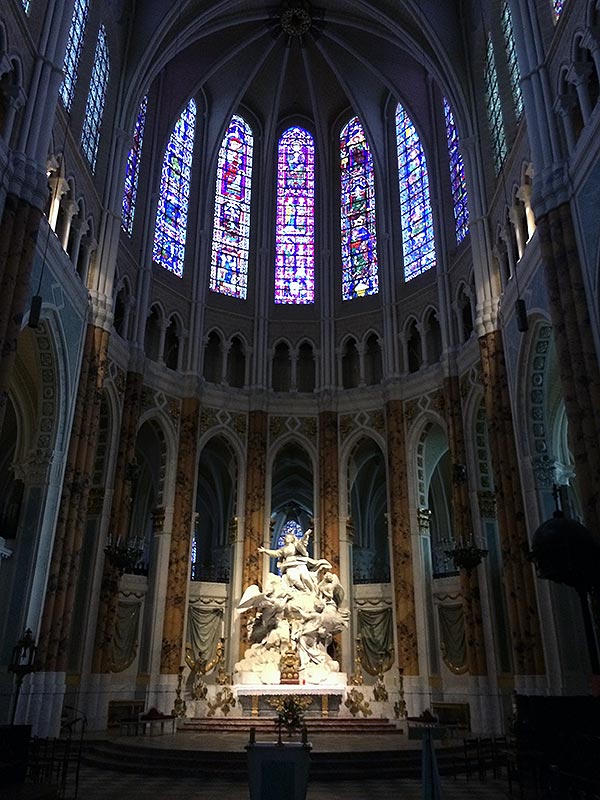 The design of the church involved “sacred geometry;” that is, the use of numbers, angles and shapes that mirror the principles the faithful believe God used in creating the universe. The cathedral’s floor is inlaid with a labyrinth, a winding circular pathway that facilitates a walking meditation. For Chartres’ pilgrims, the labyrinth symbolized pilgrimage to Jerusalem (which was not feasible for most European Christians), as well as the Christian’s life journey and triumph over evil.

There are primarily four pilgrimage sites within the cathedral:

The Veil of the Virgin

Originally from Constantinople, it was offered to Chartres by the king of France in 876. It is considered a major relic of Christ, since it would have touched the child Jesus. It was torn during the Reign of Terror in 1793. 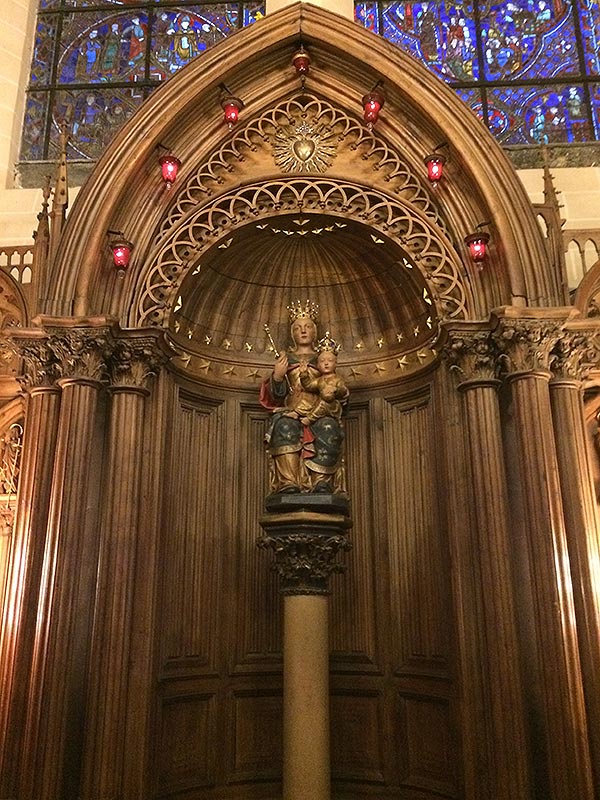 Our Lady of the Pillar, Chartres Cathedral (Chartres)

Our Lady of the Pillar

Mary is our help, ready to intercede for us in the midst of our joys and sorrows. Since around the year 1500, this statue has served as the focal point of pilgrims’ prayers asking the intercession of the Blessed Virgin Mary.

Our Lady under ground

This is the historical origin of the devotion, in this location, to Our Lady. The statue here recalls the early Christians who venerated Mary on this site, replacing the ancient pagan worship. The wealthy and the poor – pilgrims of so many times and places – have prayed here, including kings of France and saints (among them Vincent de Paul, Francis de Sales, Basil Moreau, and Mother Mary of the Seven Dolors).

Our Lady of the Beautiful Glass

One of the most beautiful works of art is also the focus of fervent prayer. The blue of in-oxidized cobalt does not fail to fascinate. On the book, which holds Jesus, is written, “Every valley shall be exalted.” Around the Virgin, a breathtaking theological presentation: a tabernacle expressing the presence of the divine, an image of the Church, Woman of the Apocalypse, object of celestial praise. At her feet, scenes from the banquet of Cana where she addresses humanity: “Do whatever he tells you”. Our Lady of the Beautiful Glass, perhaps because of her inspiring transcendence, appears in the writings of numerous authors, including Proust, Malraux, Claudel, Gide, Zweig, Hugo, and Rilke.