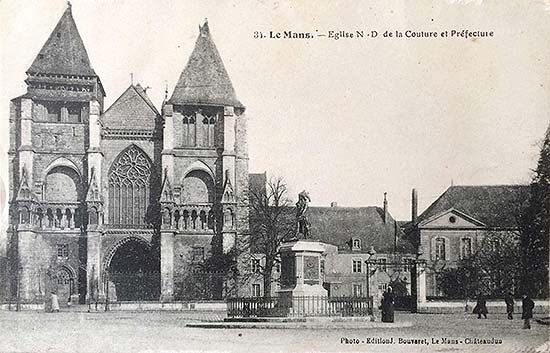 Notre-Dame de la Couture is the current name for the church that, in former times, served the Benedictine abbey of Saints Peter and Paul, founded at the end of the 6th century by Saint Bertrand, bishop of Le Mans. Destroyed by Normans in the 9th century, the abbey and its abbatiale (abbey church) were rebuilt around the year 1000 and given the name “Saint-Pierre de la Couture” or, simply, “la Couture.” Saint Bertrand’s remains were placed in the crypt.

In the 12th century, two terrible fires occurred in Le Mans (in 1132 and in 1180), one of which likely caused the loss of the church’s wooden frame (charpente). The subsequent late 12thcentury restoration resulted in the installation of modillons (supportive elements) depicting the heads of animals as well as the faces of men and women from medieval society. In the 13th and 14th centuries, the church was endowed with a façade flanked by a tower.

The 16th century wars of religion did not spare la Couture. In the spring of 1562, a group of Huguenots sacked the abbey church, breaking statues, stealing liturgical ornaments and vessels, and burning books. They also profaned the tomb of Saint Bertrand in the church’s crypt, scattering his ashes on the floor. 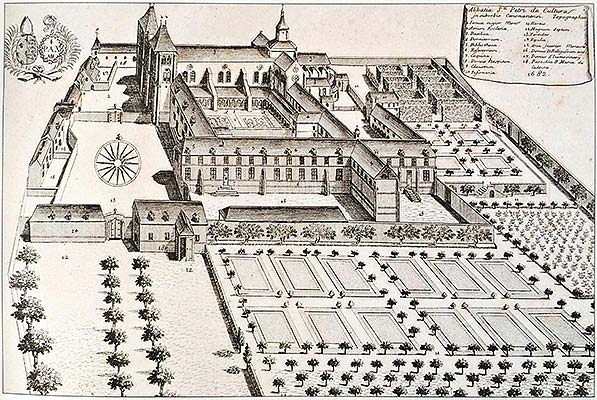 Throughout the 18th century, various beautification projects took place inside the abbey and its chapel. The French Revolution (1789) led to the departure of the monks and the eventual occupation of the abbey by departmental services of the revolutionary government.

Following street battles in Le Mans between the Vendéenne and Republican armies from December 10-13, 1793, Vendéen soldiers were kept prisoner in la Couture. Soon thereafter, la Couture was converted into a temple of the goddess of Reason. 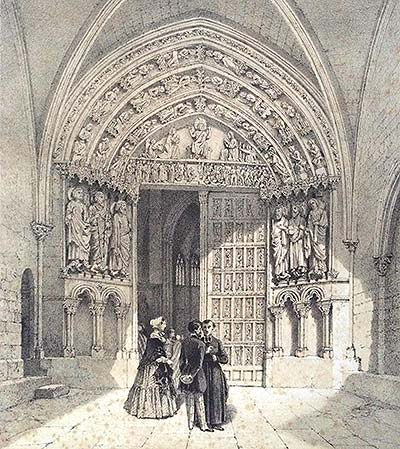 The Concordat of July 15, 1801 authorized the reopening of churches. La Couture was the first of the Le Mans parishes to do so. Henceforth referred to as Notre-Dame de la Couture, its pastor, Pierre-René Huard, returned to his ministry after ten years of exile and set himself to the difficult work of repairing and restoring the church, which had suffered years of deterioration and neglect. Abbé Joseph de Lisle, who had been in exile with Huard, hereafter resided at Notre-Dame de la Couture as priest-in-residence.

Abbé Huard, a friend of Abbé Le Provost (pastor of Laigné-en- Belin), was introduced to the young Basil Moreau and was one of the benefactors of Moreau’s early education. It was Abbé Huard who preached Father Moreau’s first Mass in the church of Laigné. Father Moreau occasionally accompanied Abbé Huard to the latter’s vacation home in Les Chapuisières.

Abbé Huard died on January 20, 1835. On February 2, during the “service de septime” at Notre-Dame de la Couture, Father Moreau reached his dear friend and benefactor’s eulogy. His words, inspired by sentiments of affection and gratitude, are said to have deeply moved all in attendance.