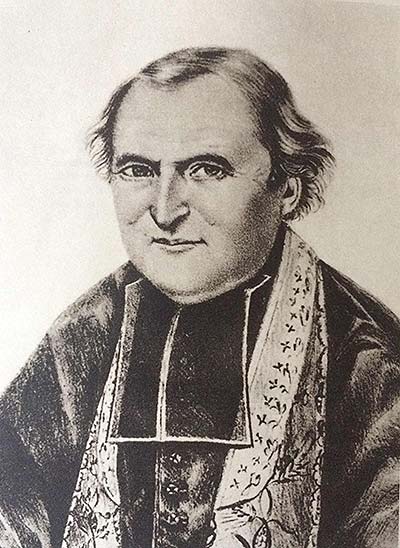 Jacques-François Dujarié – son of Jacques Dujarié and Françoise Leroux – was born December 9, 1767 in the town of Sainte-Marie- du-Bois (Mayenne). Raised in a religious and family-oriented environment, the young Jacques-François went on to be formed by the Eudists at a collège in Domfront and by the Sulpicians at the major seminary in Angers.

Dujarié was greatly impacted by the French Revolution and by the Reign of Terror that followed in its wake. His home parish priest as well as the clergy of the collège in Domfront and the seminary in Angers, who refused to swear an oath of loyalty to the Civil Constitution, were deported or imprisoned. In this environment of revolutionary upheaval, Jacques Dujarié prepared to be a priest at the side of Joseph Jacquet de la Haye (curé of the town of Ruillé-sur- Loir), from whose example he learned many lessons, and particularly the virtues of zeal and apostolic courage.

On December 26, 1795, Jacques Dujarié was secretly ordained a priest in Paris. Returning to the territory of Ruillé, he performed his priestly ministry covertly, celebrating Mass underground and taking shelter in barns, cellars, and attics. These first years of his priesthood were marked by extreme hardship and austerity.

Following the signing of the Concordat between Napoleon and Rome in 1801, which restored the civil status of the Church in France, Dujarié could perform his ministry openly and was eventually installed as curé of the parish of Ruillé in 1803. The good Father Dujarié spent himself for the glory of God and for the sanctification of his parishioners, of whom he would say near the end of his life: “I existed only for them.” In addition to working to restore and improve the parish church of Ruillé, damaged in the Revolution, the humble country priest concerned himself with the care of the poor and the education of the young. It was to this end that he founded two great works: the Sisters of Providence and the Brothers of Saint Joseph.

Concerned for a generation of youth growing up without education and ignorant of the Faith, Father Dujarié began by instructing children in the catechism and teaching them to read and write. In a remote corner of his parish called Les Hauts-de-Ruillé, he established a charitable work known as “La Petite Providence.” It was here that a small community of young women was assembled for the purpose of educating youth and visiting the sick and the poor.

With additional women joining their ranks, and eager to provide them with the necessary elements to support their charitable work, Father Dujarié would eventually send the “Sisters” of La Petite Providence to Anne de la Girouardière, founder of the Daughters of the Sacred Heart of Mary for formation in religious life and in the care of the sick. Additional recruits also necessitated the construction of a larger house (La Grande Providence), this time in the village of Ruillé-sur-Loir. 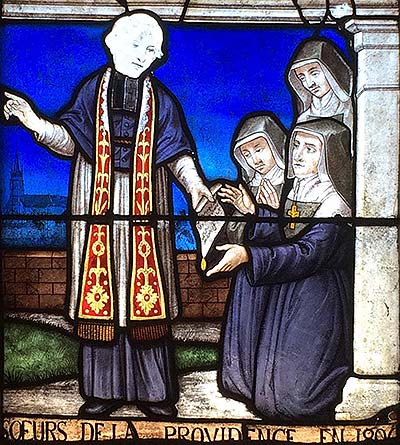 The work begun in Les Hauts-de-Ruillé expanded quickly beyond Father Dujarié’s parish and even beyond the limits of the diocese of Le Mans. While providing this initial group of women with the sacraments and with his own spiritual counsel, Father Dujarié would eventually seek to give them constitutions and rules to ensure the work’s momentum.

“One can see how, in twelve years, the little work of Les Hauts-de- Ruillé developed quietly, without a preconceived plan, by the breath of Providence, like a seed carried about by a favorable wind.” (Catta, 78)

In 1818, Msgr. Johann Michael Josef von Pidoll, bishop of Le Mans, convoked the clergy of Le Mans for a retreat – the first since the Revolution. The bishop and his priests discussed how to address the general ignorance which afflicted an entire generation of youth, particularly in the countryside. The clergy looked to Father Dujarié to found a community similar to those founded in other dioceses that were aimed at addressing a similar problem.

Father Dujarié turned to the founders Jean-Marie de la Mennais and Gabriel Deshayes for counsel. He entrusted the nascent work to the patronage of Saint Joseph. Within two years the first candidates arrived, including André Mottais, who would prove to be a beloved, loyal, and true religious. Father Dujarié housed the early arrivals wherever he could in the presbytery at Ruillé, until the eventual construction of “Le Grand Saint-Joseph” in 1824.

Father Dujarié intended that the “Brothers” serve as schoolteachers, instructing children in reading, writing, arithmetic, and the catechism. He exhorted the Brothers to form the children in virtue, and to teach them to love and to serve God. He also desired that the Brothers should ease the burden of curés, by assisting as cantors and sacristans.

The humble curé of Ruillé was devoted to his Brothers as a father to his family. He encouraged them in their own sanctification and in their zeal for the glory of God. He envisioned a society of missionary priests which could one day provide his two congregations with spiritual care and administrative governance.

The responsibilities of management (of both the Brothers of Saint Joseph and the Sisters of Providence), his long-running efforts to secure legal recognition of these works, his extensive correspondence, his ministerial obligations, and a series of crises, caused Father Dujarié great suffering and began to take their toll. While he succeeded at placing his Sisters of Providence on a sure administrative footing, this proved far more difficult for the Brothers of Saint Joseph. It became increasingly clear that for the work to survive, it would need to be entrusted to a successor who would be animated by the same zeal and who would continue the work in the same spirit. Providence designated Father Basil Moreau for this mission. 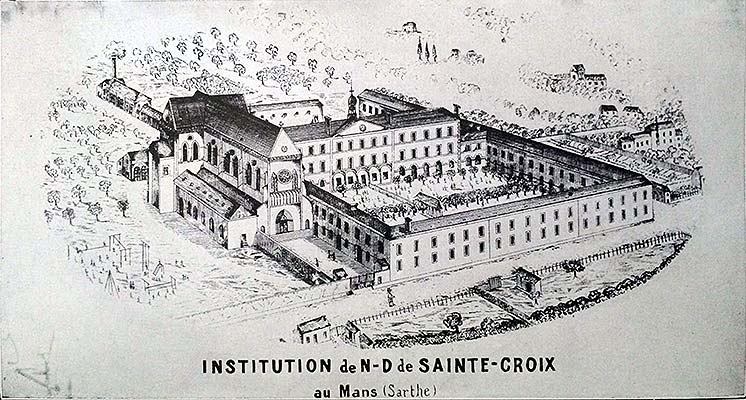 Father Moreau, who had already preached retreats for the Brothers of Saint Joseph and who had earlier provided assistance with regard to their organization and renewal, assumed responsibility over the Brothers from Father Dujarié on August 31, 1835. In a ceremony presided over by Msgr. Jean-Baptiste Bouvier, bishop of Le Mans, and held in the chapel of the Grand Saint-Joseph, Father Dujarié entrusted his “children” to Father Moreau and expressed his wish that they “henceforth regard you as their father.” (Catta 280). In turn, Father Moreau spoke of Father Dujarié’s “solicitude for the salvation of souls” and of his “ardent zeal for the promoting of God’s glory,” as well as of the “labors, contradictions, and grief” that had been caused him in the establishment of the institute. (Catta, 280)

Father Dujarié himself came to live out the remainder of his days at Sainte-Croix, “in the midst of his children”. It is said that his “greatest joy was to have his armchair placed in the schoolyard. The children would run up to him and surround him. He would distribute among them the sweets that he had been able to get a hold of. He remained the friend of children to the end.” (Catta, 293)

HE WAS THE MAN OF CHARITY. THE WORKS SOWN BY HIM
STILL CARRY ON, AND, BY THE GRACE OF JESUS, UNDER THE
PATRONAGE OF SAINT MARY AND OF HER HOLY SPOUSE, THEY
CONTINUE AND GROW FROM DAY TO DAY.
MAY HE REST IN THE PEACE OF THE LORD
THIS VERY GOOD AND VERY BELOVED FATHER.