Mother Mary of the Seven Dolors 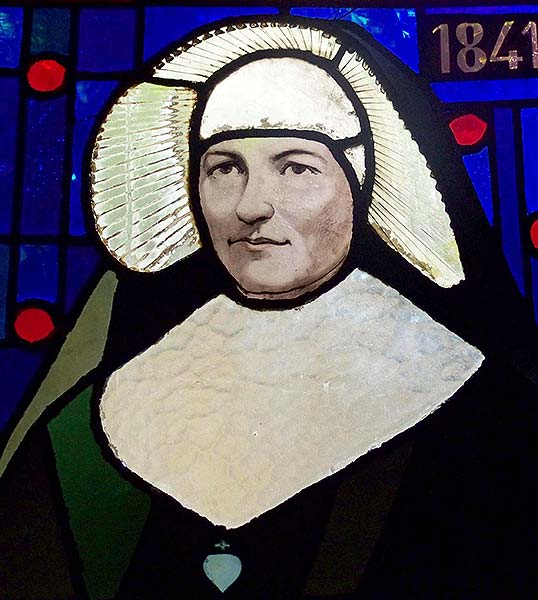 Mother Mary of the Seven Dolors, close collaborator of Father Basil Moreau and first superior of the Marianites of Holy Cross, was born Léocadie Gascoin on March 1, 1818 in Ernée, in the department of La Mayenne, France. The fourth of six children born to middle-class farmers Michel-Jean Gascoin and Rosalie-Renée (Chardon) Gascoin, Léocadie early on discerned a call to the religious life.

At a parish mission in Larchamp, the young Léocadie met Father Drouelle, one of Father Basil Moreau’s “auxiliary priests”. It was he who encouraged Léocadie to pursue her vocation with the sisters of Our Lady of Charity of the Good Shepherd in Le Mans, a community which Father Moreau served as ecclesiastical superior.

On June 24, 1841, while en route to the Good Shepherd monastery to make a retreat, Léocadie crossed paths with Father Moreau, who was returning to Sainte-Croix after celebrating Mass at the Solitude of the Savior. It was a providential meeting. Father Moreau, who had been praying for someone who could lead the women he had gathered in support of the mission of the boarding school at Sainte-Croix, viewed Léocadie as God’s answer to his prayers. One week after that providential encounter, Father Moreau would say to her: “You will go to Sainte-Croix.”

Léocadie was formed for Sainte-Croix by the saintly Mother Mary of Saint Dosithée, prior of the monastery of the Good Shepherd. On August 4, 1841, at a ceremony in the chapel of the monastery, Léocadie and three other women received the Sainte-Croix habit from the hands of Father Moreau. They also each received from Father Moreau a religious name evoking Mary as patroness and an event from the life of Our Lady or of Christ. Léocadie received the name “Mary of the Seven Dolors.” The date of August 4, 1841 would forever mark the founding of the community that would eventually come to be known as the Marianites de Sainte-Croix (Marianites of Holy Cross), though they would not receive the appellation “Marianite” until nearly ten years later.

Father Moreau discerned in Léocadie Gascoin the qualities of a leader. A strong woman with an excellent education and pure intentions, Léocadie was a generous soul with a humble heart. She would be the one who would collaborate with Father
Moreau in the development of this work to the glory of God.

Father Moreau first designated Sister Mary of the Seven Dolors “assistant” and “presider of religious exercises.” Working at the Sainte-Croix boarding school, she modeled the religious virtues of self-renunciation, humility, and holy obedience. Little by little, she assumed the responsibilities of a religious superior, encouraging the sisters in their religious observance, keeping vigil by the side of sick sisters, and embracing even the humblest of tasks as a path to sanctification. She pronounced religious vows for the first time on September 15, 1844. From then on, the responsibility for the religious formation of the sisters and the progress of the community rested on her. 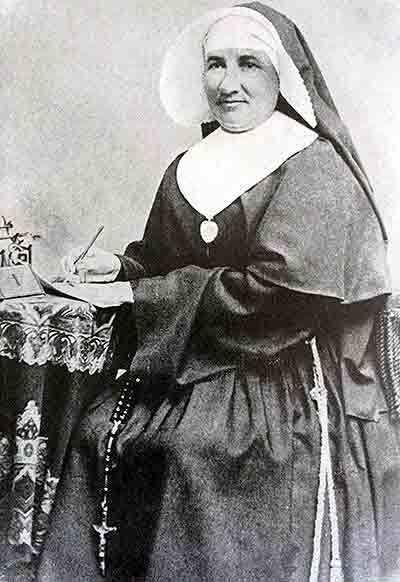 Mother Mary of the Seven Dolors

As the years past, Sister Mary of the Seven Dolors, who became known as “Mother”, collaborated with Father Moreau in the expansion of the sisters’ mission in France and overseas. In 1849, in an effort to place the sisters’ American establishments on a
surer footing, as well as to ensure that they develop according to his own vision and to promote Mother Mary’s global leadership of the sisters, Father Moreau named Mother Mary of Seven Dolors religious superior of the sisters’ establishments in America. Living at Saint-Laurent (Quebec), Mother Mary continued to distinguish herself as a leader and as a model religious, earning the respect and affection of her spiritual daughters.

In 1858, Mother Mary received from Father Moreau the title “Superior General,” a post she would occupy off and on for the rest of her life. She returned to Le Mans in 1863 where, from the motherhouse at Sainte-Croix she continued to labor for the glory of God, the salvation of souls, and the general good of the Marianites of Holy Cross.

Mother Mary had the joy of seeing the institute of the Marianites of Holy Cross expand and eventually be confirmed by official approbation from Rome (February 19, 1867). Yet she also experienced the cross of witnessing the eventual separations that would come about in her community: that of the Indiana Sisters (Sisters of the Holy Cross) in 1869, and that of the Canadian Sisters (Sisters of Holy Cross and of the Seven Dolors) in 1883.

At Father Moreau’s side

Mother Mary witnessed, firsthand, the sorrow of Father Moreau upon the sale of the Congregation’s properties in Le Mans. It was she who arranged to procure the chair in which he had spent his nights for the previous 25 years. She also assured his daily
subsistence, organizing her sisters to bring his meals to him from the neighboring motherhouse.

Mother Mary was at Father Moreau’s side when he died on January 20, 1873. In the years that followed, she remained faithful to his spirit and vision, particularly as contained in the Marianite Constitutions, written by him and approved by the Holy
See.

Devoted and attached to her spiritual daughters, Mother Mary insisted on a spirit of union and on fidelity to the Rule and to the Constitutions as the expression of God’s will for them. Her love of the Lord and of Our Lady of Sorrows, her example of prayer, her confidence in the Providence of God, and her faithfulness in the midst of many trials, made her a model and “living Rule” for her religious.