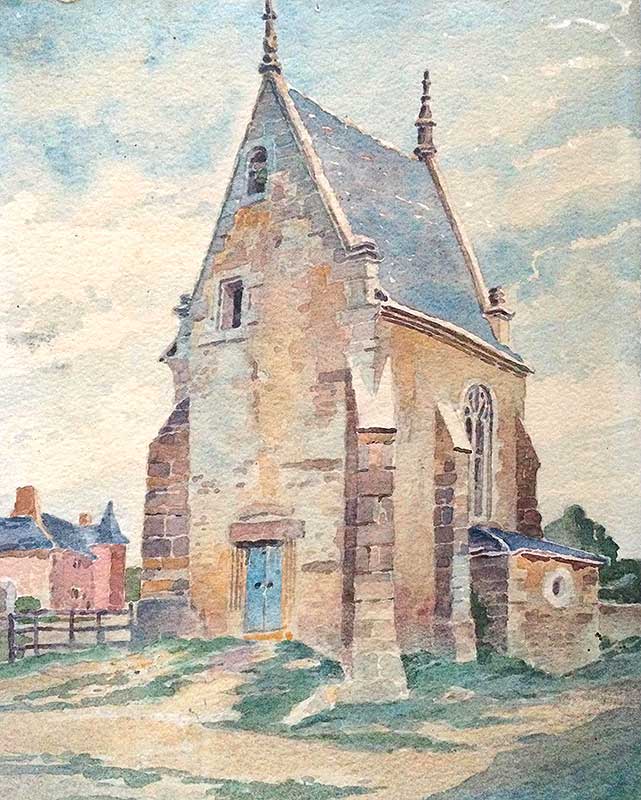 Approximately 18 km northwest of Sainte-Croix, in the village of Domfront-en-Champagne, is found the little chapel of Notre-Dame de L’Habit. Built around the year 1515, this richly finished stone-sculpted chapel is believed dedicated to Our Lady of Compassion (a title of the Virgin Mary long venerated in this place), though the Virgin Mary is venerated here under other names as well: Our Lady of Pity and Our Lady of Sorrows. The focus of veneration is the pieta suspended on the choir wall above the altar.

A place of pilgrimage

In former times, large numbers of the faithful traveled to this chapel on pilgrimage, particularly on the night of Easter. Its location along the camino to Santiago de Compostela also attracted pilgrims. Blessed Basil Moreau himself went here on pilgrimage many times. Perhaps his most notable voyage was in the summer of 1842, when he commended to Our Lady’s intercession the future of the school at Sainte-Croix.

From 1914 to 1918, many traveled to Notre-Dame de L’Habit to ask protection for their soldier sons, brothers, and husbands, and to pray for an end to the war.

In the early 1930’s, the mid-September pilgrimage to Notre-Dame de L’Habit (around the feast of Our Lady of Sorrows) began to take on a more festive character. Holy Cross Father Eustache Gagnon frequently participated in this annual pilgrimage. Father Edmond Morisseau, csc, and Marianites of Holy Cross are also known to have participated in at least one of them.

The chapel of Notre-Dame de L’Habit was restored in the 1970’s and classed as an historic monument in 1972.

Even unto today, the chapel of Notre-Dame de L’Habit is often visited by the faithful and appreciated as a place of prayer and contemplation. The Shrine of Blessed Basil Moreau participates in the annual pilgrimage to Notre-Dame de L’Habit, organized by the parish community centered at Conlie.

Origin of the name

It is commonly accepted that the word “L’Habit” is but the modern orthographic rendering of the old French word, “Labit”, which has fallen out of use. Scholars differ, however, as to the origin/definition of the “Labit” referenced here.

Could it refer to the “Labit” (meaning, habitation or house) of a popularly venerated hermit who may have once lived on the site? Anchorites were known to be in the forests of this region as early as the 6th century.

Or, perhaps it refers to the “Labit” (meaning, domain belonging to a regional abbey) that, as early as the 14th century, belonged to the Augustinian abbey of Beaulieu. It is likely that Geoffroy Suet, abbot of Beaulieu, had the chapel built as part of the push for reconstruction following the Hundred Years’ War.

Finally, the chapel’s title might be making reference to the « Labit » (meaning pain, torment, martyrdom, distress) depicted in its famous pieta. 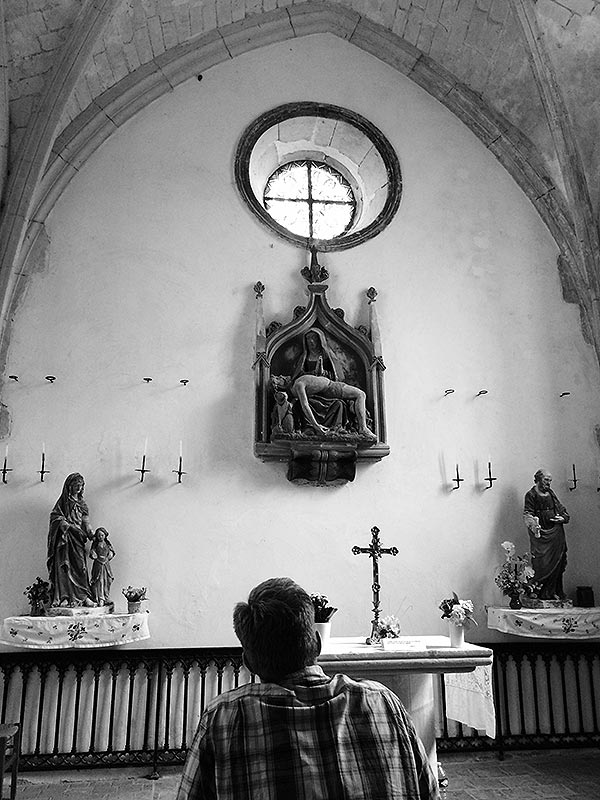 From the writings of Father Charles Moreau, nephew and first biographer of Blessed Basil Moreau:

“It was [to Notre-Dame de L’Habit] that Basil wished to go on foot to bring his petition to the Mother of God for the preservation of his educational institution in distress. He celebrated Mass there with a confidence that had its desired effect. Some days later, the two candidates for the baccalaureate in science returned to Sainte-Croix, furnished with a second diploma; and the older of the two, who was a priest and professed religious, was authorized by ministerial permission to adopt as title: “head of institution.” The start of the school year was therefore able to take place as scheduled, and it was big. The pilgrimage, which had been marked by such a necessary grace, was not forgotten. The Founder of Holy Cross repeated it many times, and he often sent one or another to ask Notre-Dame de L’Habit – by the weariness of the trip, by virtue of the holy sacrifice of the Mass, and by the fervor of prayer – for the happy outcome of his difficulties. May the old stones of this holy place retain forever, for its venerated patroness, the memory of our pious gratitude, many times imprinted on the dusty highway!

Many could find these recollections from 60 years ago a little long, in order to say that which, today, asks but a turn of the hand and only half a drop of ink; but is it possible, and would it be good, in the midst of the ease of academic freedom today, to not recall that which was accomplished, with the help of heaven?” (The Very Reverend Father Basil Anthony Moreau, Priest of Le Mans, and his Works, by Abby Charles Moreau, first volume, pages 236-237.)