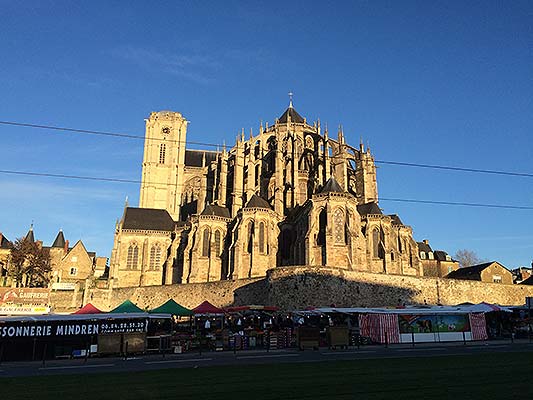 The story of Blessed Basil Moreau is intimately connected to the history of the Diocese of Le Mans – a history that dates back to the foundation of the diocese when Saint Julien, first bishop of Le Mans, evangelized this region in the 4 th century.

Around the year 600, another bishop, Saint Bertrand, established the first Holy Cross church to serve pilgrims traveling to the Monastery of Saints Peter and Paul (the present day church of Notre-Dame de la Couture), and, it is said, to house a relic of the true Cross. Located not far from the site of the present-day Holy Cross church, Saint Bertrand’s church of Holy Cross gave the local area it’s name, and thus, the name of Moreau’s congregation many centuries later.

The Cathedral of Saint Julien, seat of the Diocese of Le Mans, is one of the finest examples of Gothic-Roman architecture in all of France. The current cathedral was built gradually over the course of the 11th through 15th centuries. Pope Urban II consecrated the cathedral (in its early stages) when he came to Le Mans to preach the first Crusade in the year 1096.

Another highlight is the vaulted ceiling of the Chapel of the Virgin Mary. Forty-seven angel musicians are depicted. The paintings, which date from the 14th century, had been covered over and were only rediscovered in 1842. 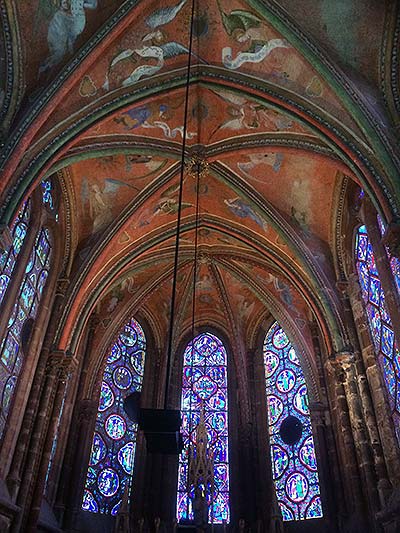 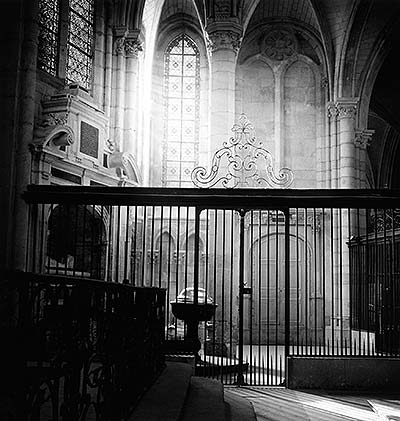 The cathedral contains the tombs of people of note. It was also the site of the baptism of Henry II, king of England, and of the marriage of his parents Geoffrey of Anjou and the Empress Matilda, daughter of King Henry I.

In the cathedral crypt can be found the tombs of many bishops of Le Mans, including those who played a significant role in the life of Basil Moreau and in the history of the Congregation of Holy Cross:

Blessed Basil Moreau and the Cathedral

As a priest of the Diocese of Le Mans, Father Moreau was very familiar with the Cathedral of Saint Julien. He was named an honorary canon of the cathedral by Bishop de la Myre-Mory, when he was only 26. This same bishop ordained Basil Moreau subdeacon on May 27, 1820, and deacon on April 7, 1821. Both of these rites occurred in the cathedral. Moreau’s ordination to the priesthood (August 12, 1821) took place in the Chapel of the Visitation.

It was in the sacristy of the cathedral where, after celebrating his morning Mass one day in early October 1836, a layman (Monsieur Barré) approached Moreau and offered him the use of his house as a residence for his auxiliary priests and as a primary boarding school until work could be completed on the Institution Notre-Dame de Sainte-Croix on the nearby “de Lisle property”.

The current bishop of the Diocese of Le Mans is Monsignor Yves Le Saux. He has served in this role since 2008. On September 21, 2014, he presided over the establishment of the Shrine of Blessed Basil Moreau at the church of Notre-Dame de Sainte-Croix.

“Let us thank Divine Providence for the illustrious example given to the church of Le Mans, since she has for founder a holy bishop who had the joy of receiving his mission from the very mouth of the prince of the Apostles, and let us honor his patronage by a special devotion.”