Saint Vincent’s Seminary was the major seminary (or, Grand Séminaire) of the Diocese of Le Mans from 1816 through 1906. Basil Moreau entered this seminary in the fall of 1816 and pursued his philosophical and theological studies here until his priestly ordination on August 12, 1821. During Moreau’s seminary formation at Saint Vincent’s, his superior was Abbé Jean-Baptiste Bouvier, the future bishop of Le Mans.

Following his ordination and his supplementary formation with the Sulpicians in Paris, Father Moreau returned to Saint Vincent’s Seminary in 1825 to teach dogmatic theology. In 1830, he was transferred from teaching dogma to teaching sacred scripture. 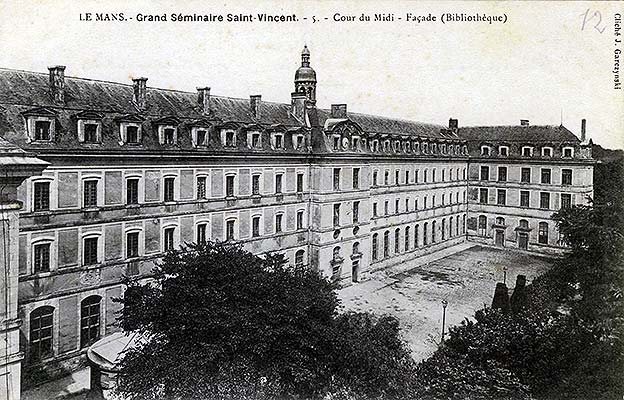 As a seminary professor, Father Moreau was a very popular lecturer and spiritual director. It was here at Saint Vincent’s Seminary where he met many of the young men who would later join his band of Auxiliary Priests.

In January 1835, Father Moreau was appointed assistant superior of Saint Vincent’s Seminary – a post he held for nearly two years. Beginning that same year, the Auxiliary Priests would regularly gather in Moreau’s quarters for common prayer and discussion of scripture and moral theology.

In October of 1836, Father Moreau was relieved of his teaching position and of his post as assistant superior. No longer able to stay at Saint Vincent’s, and the building and remodeling at his Institution Notre-Dame de Sainte-Croix not yet complete, Father Moreau and his Auxiliary Priests moved into a residence in the neighborhood of Sainte-Croix, known as the Barré House. For Father Moreau, the offer of this home for him and his Auxiliary Priests was an answer to prayer. 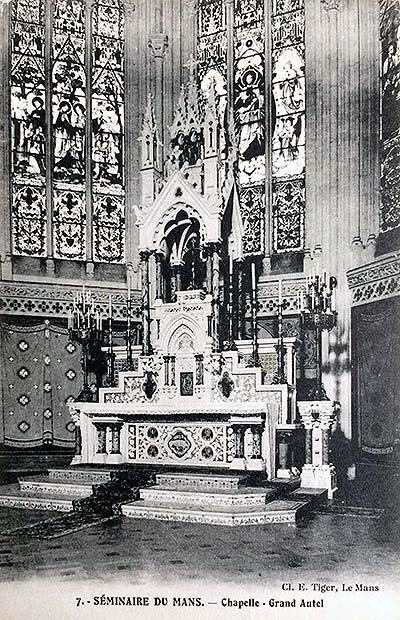 Saint Vincent’s Seminary took its name from the building it occupied – the old Saint Vincent’s Abbey, which was founded in the 6 th century and restored in the 9 th century following Norman invasions. At the time of the French Revolution, the abbey monks were expelled and the buildings used as barracks by the revolutionary government. In 1806, the military administration ordered the magnificent abbey church (the first Romanesque church in the region) demolished, purportedly for interfering with the maneuvers of the soldiers. Then, in 1813, portions of the ancient monastery were destroyed to make room for two streets.

After the Church reassumed proprietorship over the former abbey, Bishop de Pidoll eventually installed his diocese’s major seminary there in 1816. It was Bishop Carron who undertook the construction of the seminary chapel, which was consecrated in 1825.

Interestingly, in August of 1818, Bishop de Pidoll held at Saint Vincent’s Seminary a diocesan clergy retreat – the first of its kind since the Revolution. The main item for discussion was the challenge of religious ignorance into which the vast majority of the people had fallen since the Revolution. The name of Jacques-François Dujarié was proposed as the one to address this situation. Abbé Dujarié would eventually go on to found the Brothers of Saint Joseph – the precursors of the Brothers of Holy Cross – for the very purpose of educating people in the faith.

In 1906, following the laws treating of the separation of Church and State, the former abbey turned seminary returned to State ownership. It now serves as a public high school (lycée Bellevue). As for today’s seminarians of the Diocese of Le Mans, they complete their studies at an inter-diocesan seminary (Saint-Jean) in Nantes.