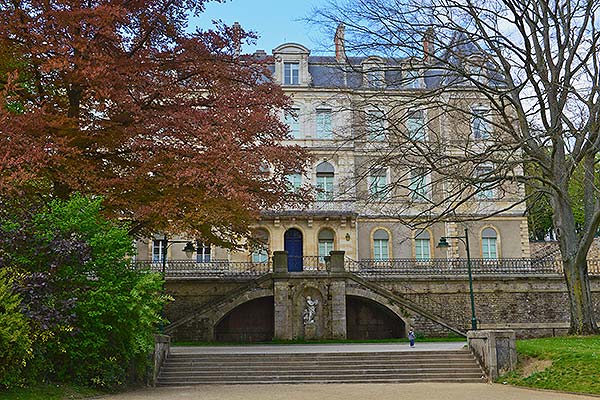 One kilometer northwest of the Shrine of Blessed Basil Moreau is Tessé Park. In Father Moreau’s day, a large mansion that had belonged to the Counts of Tessé occupied a portion of this site (extending out from the northwest corner of the park). The Diocese of Le Mans had purchased the mansion in 1810 with the goal of establishing there its major theology seminary, but the mansion proved insufficient in size. The theology seminary was eventually established in the former Saint Vincent’s Abbey, just 600 meters to the north of the Tessé site, with the Tessé mansion set up as the philosophy seminary.

The philosophy seminary was configured of two parallel buildings separated by a courtyard. While Father Moreau never studied philosophy at Tessé as a seminarian (it was opened as a house of philosophy only after he had finished his own philosophical studies), Bishop de la Myre-Mory put him in charge of the philosophy course there in 1823. Father Moreau thus taught philosophy at the Tessé site for two years, before being transferred in 1825 to the theology seminary (the former Saint Vincent’s Abbey) to serve as a professor of dogma.

When Father Moreau arrived at Tessé in the fall of 1823, he joined there his confessor and longtime confidant – Abbé Louis-Jean Fillion – whom he had first met at Château-Gontier and who was now serving as superior of the philosophy seminary at Tessé.

The Diocese of Le Mans lost possession of the mansion at Tessé in 1832, when the City of Le Mans requisitioned the house because of a cholera outbreak. The house was then used to quarter troops sent to Le Mans by King Louis-Philippe for the purpose of quelling possible uprisings in the west. The diocese regained possession of the Tessé philosophy house in 1836. It was demolished in 1842.

The building that today sits atop the northern edge of the park, parallel to the Avenue de Paderborn, is the Museum of Tessé. This building was built by the Diocese of Le Mans to serve as a residence for the bishop. Bishop Bouvier lived at this site from 1842 to 1848. In 1871, the residence was burned by the occupying Prussian army. Rebuilt from 1873 to 1877, it now serves as an art museum (beaux-arts).